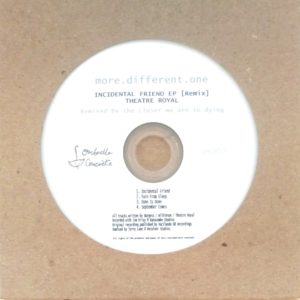 Theatre Royal are firm favourites with the likes of Gideon Coe and Steve Lamacq (BBC6 Music) and John Kennedy (Radio X) and have become a regular feature of alternative and indie music radio stations across the UK and beyond. more.different.one sees Terry Lane AKA the closer we are to dying remixing all four tracks from Theatre Royal’s critically-acclaimed recent EP erring the sound away from bright and breezy guitar led alt pop into a much darker, ambient dub and scratchy, experimental psych web of overtones and echos; and in the process completely reworking their sound.

Next up is more.different.two – 4 new tracks from Rastko produced & remixed by Terry Lane scheduled for release on Friday 20th March.

For more information on the Ombrelle Concrète artists and releases, visit https://ombrelleconcrete.bandcamp.com/.